So, this is my first painting since the Winter – one Solstice to another. 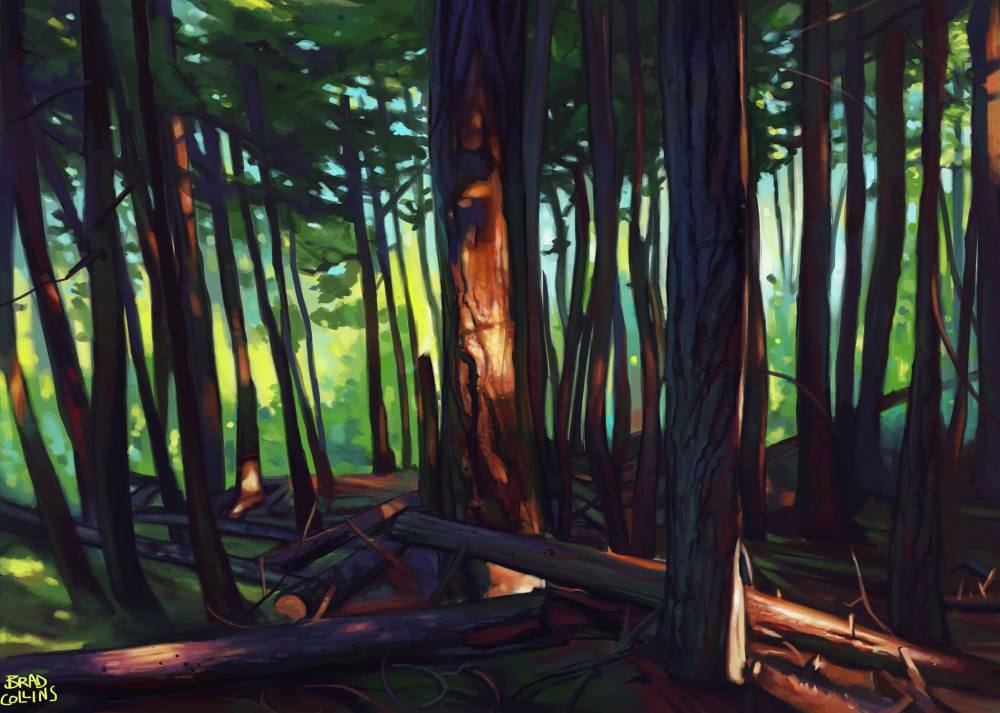 This painting is of a regular stretch of forest off the edge of a trail somewhere near McFall Creek – directly behind where I live and where I painted it. I could try and show you exactly where it is, but the light would have to be just right to recognize it.

There are a great deal many more colours out there in this forest than occur to my memory. They are things that live only in the eye. What sits in my mind as being a gray tree amid a shadowy wood will to the eye burn with gold, cinnabar, and cobalt like jewel-beetles in the sun. Trails light up at your feet like pools of honey poured through stained glass, and each stick of wood stands like a vertical rainbow.

That’s what I see on the best of days, anyway, and it’s what I was out in the forest looking for like an entomologist with a butterfly net.

I’ll admit it: I was feeling a bit unsteady before I got started on this one. Out of tune, maybe – but I wanted to see it made more than I feared to make it.

As mentioned before, Winter had left me feeling a little frostbitten, and though I was thawing out, I wasn’t sure yet how many fingers and toes I had left to work with.

All of them, as it turns out.

Real tricks and trades: When I dread painting something, I sort of trick myself into production mode by getting started, and then posting infrequent “work-in-progress” pictures to social media as I go.

From composition to about mid-way through, I’ll post little sneak-peaks of things that may not survive to the end, but please me enough that I want to share them. Things change dramatically during the broad-strokes, and that’s fun for me to see in other painters – so I do the same. Closer to the final stages, I’ll hold back and let the final piece fill in whatever blanks are left.

Doing it that way, I feel like I’m walking through shorter milestones and I get to benefit from a little back-slapping encouragement along the way.

On the less fuzzy-wuzzy flip-side of that coin is the equally motivating factor of public accountability.

Once I’ve started something in the public, I tend to feel strongly obligated to complete it for anyone who’s interested in seeing it finished. Even if I myself lose interest, I want to make sure you don’t, and weird as it sounds, it sort of puts me on the clock to get the job done. Knowing I left it out there hanging around all messy and under-cooked encourages me to fight it through to the end instead of privately balling it up and bank-shotting it into the recycling bin.

Why do you think so many people post weekly fitness pictures instead of just one at the end?

I knew these methods well, and I knew they’d serve me in the coming days, but it wasn’t following through from one marker to the next that was giving me trouble at this point. It was getting started on something at all.

Be bold: At a certain point, you have to say yes in the places where you’ve been saying no. Courage is called for, yes, and action required before discovering that risk is simpler and more energizing than the perpetual anticipation of defeat.

I had a gorgeous piece of scenery to work with, my equipment was functional, and though I hadn’t painted for a while, my sketchbooks were full of interesting new work (all about trees and plants, no less). All I had to do was stop thinking and get started.

Burnt out on being burnt out, the idea of listening to myself continue the debate between nihilistic paralysis and the red hot urgency to get a grip was nauseating. Rather than let it wind to a pitch, I hit the breaks like a frustrated parent and threatened to raise the stakes.

No safety nets. No buffer. Just an internet audience of followers, friends, colleagues, and anonymous randoms watching every naked move I make on the canvas with as much power of scrutiny as I myself get.

No negotiating. No thinking about it. No more whining about your delicate introverted workarounds. Just shut the fuck up and do it.

So I just shut up and did it.

I’d done a few live painting sessions before at festivals, but this would be different. I wouldn’t just be one dude with a colourful whatever in a playground of other spectacles; I’d be working directly from my screen to yours – however many of you happened to tune in during broadcast. I’ve never been good with crowds, and I don’t like being the center of attention, but the time for hand-wringing was past. If I didn’t stop, I never would. The key, like it is on stage, would lay in not becoming overly self-conscious; which is about as challenging as it is for you to not imagine an octopus in a top-hat now that I’ve said the words octopus in a top-hat.

I’d never let anyone in that close to my processes before. I wasn’t giving myself anywhere to hide, and as I realized that, I kind of freed myself from any fear about it at all. Any of it. I mean, who cares if it’s boring? or full of mistakes nobody else notices? or if nobody shows up to watch? or if everybody does?

What, was I afraid of showing how much care I put into a painting? Like that’s a bad thing?

Sometimes the big scary thing is the best option just because it’s different. The devil you don’t know can be a lot more fun than the boring old threadbare one you’re stuck with.

All told, there were about three or four sessions at three to six hours a piece to produce the above painting. I think the end of the final broadcast on this one ended sometime after two AM on a Sunday.

The product is secondary. That said, whatever it happens to be held in the eyes of other people is important to me, but if I focus on the practice instead, there’s more product for more eyes to behold anyway.

In the case of this painting, I’d fallen away from the practice of painting long enough that I got my priorities backward. I’d put way too much importance on the anticipated quality of the work and not on the quantity of the practice. I’m lucky that this forest turned out in a way that I’m happy with, but it shouldn’t ever really matter that much.

No matter what you’re working on, even if what you work on never sees the light of day, keep picking away at it. The practice of practice itself might be the most important skill to have, and it applies to every discipline I could name.

In any case, I think that maybe I’ve got it figured out again for a while, and it’s my intention to keep painting live and posting new work as often as I can – even if, or perhaps especially if it doesn’t rise to my expectations or make a lot of sense.

I’m also slowly working on opening up a few more pipelines to my work where I can publish segments of other projects in progress.

If you’re interested in tuning in to watch me work on my next painting, follow me on twitter or instagram so you can see me drop the link when I’m about to get started. Or you can go here to my twitch channel and wait. As it is today, I’m nearing the end of a live painting of the Helix Nebula. Feel free to show up and bother me with messages, tweets, and comments.

Or pizzas. I’m open to being hassled by pizzas.